Radio-frequency identification devices, or RFID chips, are just bigger than a grain of rice but capable of withholding a vast amount of information. The conspiracy behind these chips is that eventually, everyone will be required to have one. Everything from your health records to your money would be tracked on this tiny device. 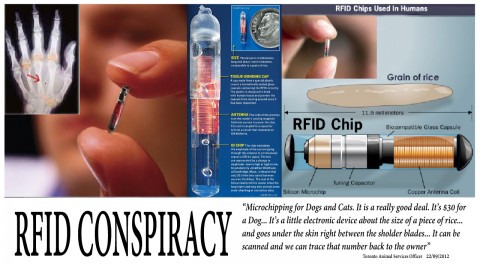 eduardo
Our Privacy Taken Away
In the article “Human Chips More Than Skin-Deep,” CNET News.com by Michael Kanellos (2004) stated in the article that “RFID tags sewn into clothing or even embedded under people’s skin could curb identity theft, help identify disaster victims and improve medical care, they say. Critics, however, say such technology would make it easier for government agencies to track a person’s every movement and allow widespread invasion of privacy” (Kanellos, 2004).
As a civilian, I would like to know that I could live in a place where my privacy is not taken from me. I wouldn’t like anyone or any group of people to have so much control over my life that they would be able to track my everyday movement. “there are both potential problems and benefits associated with human microchipping. One problem is that a person’s privacy could be severely infringed upon.

This could happen because the person’s movements, both physical and financially, could be hacked into. A third potential problem could be who would have access to the information, and who stores the information” (Charles Smith, 2008 pg.152). I believe inserting the RFID chip into humans goes against our constitution and it takes are rights as American citizens and we should not allow the government to have that much power over us.
westernfrontonline.net

Anonymous
Implantable RFID chips designed for animal tagging are now being used in humans. An early experiment with RFID implants was conducted by British professor of cybernetics Kevin Warwick, who implanted a chip in his arm in 1998. In 2004 Conrad Chase offered implanted chips in his night clubs in Barcelona and Rotterdam to identify their VIP customers, who in turn use it to pay for drinks.
panoffolin.wordpress.com