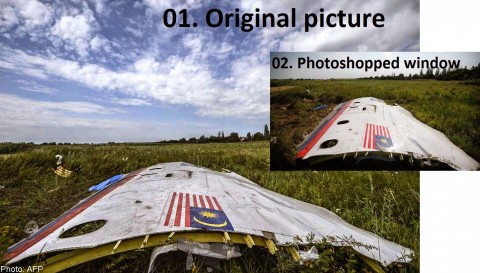 REUTERS showed the Photoshopped images showing that piece of the wreckage of Malaysia Airlines. Malaysia Airlines renovated their jets a couple of years ago, modifying the interior and blocking the window in question. The presented pictures of MH17 with a window next to the door and below the flag is, apparently, an older image of the jet. The secret agencies involved in this false flag, the internet buzz created around this information made them panic. REUTERS is Russian source, they had understood the guilt of Russia and tried to cover their presumed mistake.

kardinaz09
President of russia idiot. He want to meet obama discuss about mh17. He need support from usa actually. Stupid president over the world.
youtube.com

Jacco Vasseur
I would like to see the dutch report as i am Dutch and it is a big issue here in the netherlands. A lot of people are calling for war. I firmly believe it is a false flag but i am totally not sure about the details because there is so much disinfo! If you need help translating i can be your man!
humansarefree.com

Tom de Castella
in the case of MH370 there is not even an official version. Nobody knows what happened to MH370. It's a modern mystery.
bbc.com