It all seems so innocent ? until you wade into the Internet and find no end of dastardly explanations for the Smurfs' real malevolent intentions. According to various interpretations, they are: racists and anti-Semites; patriarchal misogynists; closeted homosexuals; and/or diabolical Satan worshippers. So be vigilant, parents! 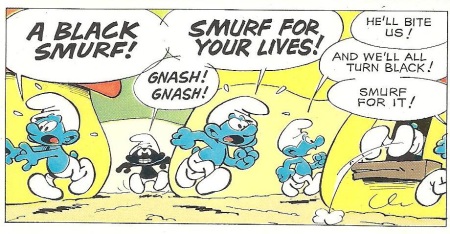 rifter
I was raised a Jehovah's Witness and we were specifically told by the cult leaders not to watch Smurfs or play with any toys related to the Smurfs, as they would supposedly bring evil spirits into the home. JW's have a heightened level of fear and superstition regarding such things, and they come up with all kinds of internal legends to explain them. Some urban legends within the cult even had smurfs turning into little spirit-possessed devils that would harass children during the night, or come alive inside of Kingdom Halls and have to be chased out! Thank goodness I got out of that crazy cult.
vulture.com

Nessa
Smurfette was originally a brunette created by Gargamel to distract the males Smurfs. She was later accepted into the fold of the Smurf population, but only after she was made "good" by the magic of Papa Smurf (which for some reason, also turned her into a blonde).