On August 15, 1952, one of the worst flash floods ever to have occurred in Britain swept through the Devon village of Lynmouth. The disaster was officially termed "the hand of God" but new evidence from previously classified government files suggests that a team of international scientists working with the RAF was experimenting with artificial rainmaking in southern Britain in the same week and could possibly be implicated. 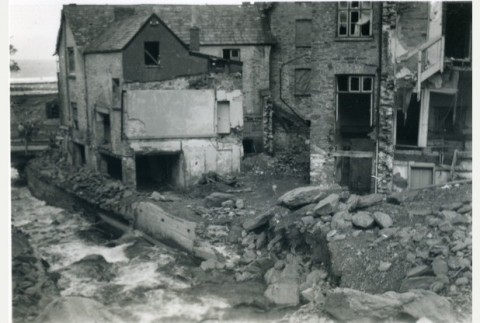 John Vidal
The British Geological Survey has recently examined soil sediments in the district of Lynmouth to see if any silver or iodide residues remain.
theguardian.com

David Huxtable
Although not the biggest flood Britain has had, it was one of the most spectacular and most studied.
exmoor-nationalpark.gov.uk

Helen Weinstein
Survivors of the Lynmouth flood called for - but never got - a full investigation into the causes of the disaster. Rumours persist to this day of planes circling before the inundation.
rense.com