Is Eurabia a Conspiracy Theory?

Western Europe is threatened by a Muslim invasion. Muslims come here, give birth to many children and take over Western societies from within. Europe will become undemocratic, anti-American and anti-Semitic. Christians and Jews will be oppressed. That is the real purport of the Eurabia-theory, which became popular in the U.S. after 9/11. 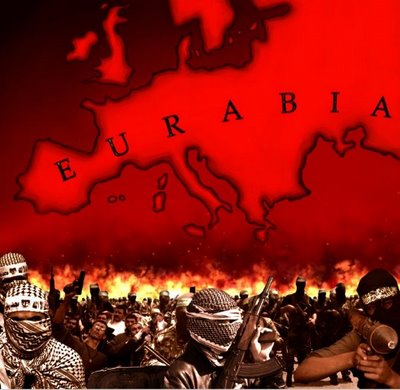 Doug Saunders
Muslims have a higher birth rate than other religions, and will take over the world by population
dougsaunders.net

Anonymous
The world’s Muslim population is expected to increase by about 35% in the next 20 years, rising from 1.6 billion in 2010 to 2.2 billion by 2030, according to new population projections by the Pew Research Center’s Forum on Religion & Public Life.
pewforum.org

Adi Schwartz
The original sin is attributed to Charles de Gaulle. Disappointed by the loss of the French colonies in Africa and the Middle East, as well as with France's waning influence in the international arena, the president of France in the 1960's decided to create a strategic alliance with the Arab and Muslim world to compete with the dominance of the United States and the Soviet Union.
haaretz.com