The Two Babylons is an anti-Catholic conspiracy theory based religious pamphlet produced initially by the Scottish theologian and Presbyterian Alexander Hislop in 1853. It was later expanded in 1858 and finally published as a book in 1919. Its central theme is its allegation that the Catholic Church is a veiled continuation of the pagan religion of Babylon, the veiled paganism being the product of a millennia old conspiracy. 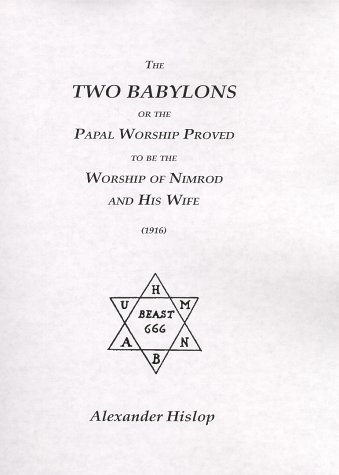 jesuitnomore
Alright, some do not wish that others would read the book, and make up their own mind.
archive.org

ohfor07
This kind of material may not be for everyone. In fact, if this was 10 to 20 years ago, a time when I was living a prevoius life, this kind of material was not of any interest to me..... but over the years things for me have changed in this respect.
curezone.org